Here was the situation this morning; I woke up to find it pouring down with rain (what else can be expected from the British weather!) The first thought I had was I don’t want to get up I would rather stay here in my warm bed; it’s going to be a horrible day. I’m sure many of you have felt like this at some point in your lives – whether going to school or to work.

So I had a dentist appointment today and I hate, absolutely HATE going to the dentists, I have a serious bout of dental phobia. I was going to make up an excuse and reschedule it for another day. But then I realised, why was I making the weather an obstacle for myself. It wasn’t going harm me, just get me a little wet which an umbrella could sort out; so I went and I hated it but the important point is that I didn’t make any changes to my plans and got everything done.

Would you let an opportunity slip by? Lets say you had an interview, which could either make or break your career, would you give it a miss just because it was raining? 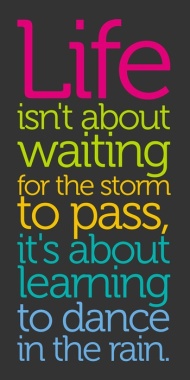 Everyone has problems when it comes to self motivation, I do sometimes – so when I came across this quote on Instagram (thegoodquote) I just had to share it with you guys!

It will be a quick post about friendship today. I’ve just had a lovely dinner out with my friends from work tonight and it just made me think about how important my friends are to me. I’m sure you all would agree; without any friends, life would become quite lonely really, a very boring place.

A friend is someone who knows all about you and still loves you.
― Elbert Hubbard

Friendship is born at that moment when one person says to another, ‘What! You too? I thought I was the only one.’
― C.S. Lewis

If you have good friends, no matter how much life is sucking , they can make you laugh.
― P.C. Cast

So ask yourself, how important are your friends to you?

Hard work always pays off and you should let it speak for itself!

As long as I can remember I never had any qualms over my weight when I was younger, however all that changed when I started secondary school. As the pounds piled on it affected my confidence, I lost my self-esteem and it made me feel self-conscious all the time. I tried a number of different diets but I never took them seriously and still ate or more so stuffed my face with the odd junk food here and then.

So when I read about people losing so much weight whilst on Slimming World, I was abit sceptic

al I thought it was the same as the other diets and it wouldn’t work. I still went along to the group with my sister. It won’t be wrong to say I felt daunted, abit apprehensive if I’m honest for that very first group meeting but our consultant, Clair was so supportive and helpful throughout the whole process and pretty soon we were weighed and registered.

It has now been over six months since then and I haven’t looked back since. Losing four pounds in my first week gave me to strength to carry on and it wasn’t long that I had lost my first stone. I was so happy which in turn motivated me and made me more determined to lose weight. So right this moment, I’m so proud to tell you that I have lost over three and a half stones. 😀

Joining Simming World was the best decision I made ever, I feel more active, confident and generally more happier with myself than I was before.

If anyone is thinking about joining Slimming World, my advice is to just do it – DON’T overthink it, make that decision and it’ll change your life. Trust me! 🙂

For more info on Slimming World, you can go on their website:

It’s a quick update but firstly, I’m extremely sorry that I have been away for months and I know no amount of excuses can cover it. But I have some very exciting news to share with all of you.

After months of contemplating, I’m so so happy to announce that my blog is now . . . najmahwrites.com. 🙂

Don’t ask me why Najmah Writes…(cos I know, I haven’t been doing a whole lot of writing in the last few months), but to be honest that was the only one that stuck out from the rest!

Anyway, keep a look out as there will many changes coming in the next few weeks which I’m pretty psyched about. Leave your comments, feedback on the new site, I would love to read them.

I hope you have had a wonderful Christmas but in a few short hours we’ll all be saying goodbye to 2013 and welcome to 2014!

Personally for me, this past year has whizzed by. It feels like yesterday when I was stressing over my dissertation, literally worrying myself sick whether it would EVER get finished on time? Now I have graduated, which still seems unreal to me sometimes. One promise I have made to myself, is that travelling will definitely be on the agenda next year; either in the UK or going abroad.

Graduation, like for many other graduates was a huge deal for me, it meant I would now be known as a qualified journalist. 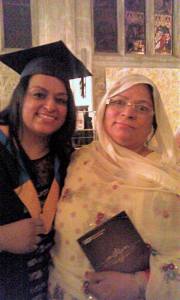 As the event was taking place in the evening, I remember taking all morning to get ready. So while hobbling on my heels, being constantly irritated by the robes and hoping I wouldn’t become the laughing stock of the ceremony by tripping or falling over, especially in front of my family and friends. I finally graduated. Then with the endless clapping it was over, like a blink of an eye. It was quite emotional at the time; as I was taking away four years of memories with me but I wouldn’t change anything for the world

Over the summer I worked on the Crimestoppers Cycle Theft Campaign with a group of Criminology students; we organised a event where we gave out information to prevent cycles from being stolen in the Peterborough area. I took the PR role of the team. I wrote press releases for the event, became active on social media wesbites such as Facebook and Twitter to spread the word, which received good response. We ended up winning the ‘Crimestopper of the Month’ award, which was awesome!

All in all this year has definitely been great. Here’s hoping that 2014 will bring more opportunities and in general be bigger and better.

I’ll be spending the last day of 2013 with my family, it certainly beats being out in the cold!